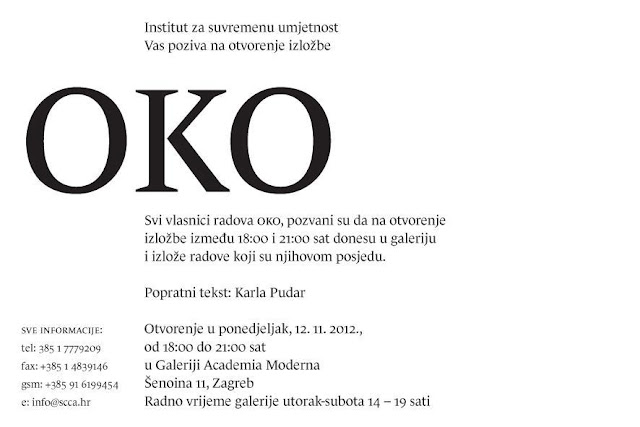 Institute for Contemporary Art presents the exhibition of OKO. OKO is the most well known street artist of Zagreb urban culture, educated at Academy of Fine Arts, with an elaborated visual language which makes here immediately recognisable as the motives she uses in painting the city streets. OKO lives and works within the urban street culture. From 2005 she was performing illegal installations on the streets, using graphic techniques, such as linocut and etching, and drawings including ink, acrylic, pencil, markers, stickers etc. OKO worked for 6 years in a skateboarding shop and thus participated in many urban extreme sports events in Croatia and beyond. She painted Zagreb's first indoor skate park Warehouse – the skating company that issued the first Croatian artist series of skate boards. With the Puma 34 collective, OKO founded the Croatian street movement Zine. This was based around an urban art gallery, workshops and printed publications with contributions ranging from renowned Croatian artists to the completely anonymous, from Croatia and beyond. They also ran a blog covering these events and published interviews and discussions with various guest artists – http://streetzinezagreb.blogspot.com/ She has been nominated for ARTAQ (European urban arts award) in 2011 The artist will bring only one of her paintings to the gallery, and will invite all owners of her works who acquired or were presented her works, to compile the exhibition themselves, with the works they own. The exhibition OKO will be a kind of retrospective of this artists’ works, formed until 2012, but only those that are privately owned by collectors and / or friends and colleagues, and only those who will accept the invitation to participate in building and installing the exhibition. In accordance with the artist’s weltaschaung, but also in a wider perspective, of a generation of artists who are primarily interested in the non-institutional and non-organizational activities, artists who mostly chose the street as a venue for their public exposure, this exhibition is designed so that only partially – as minimally as required for a constructive collaboration - uses the gallery space and curatorial support. The exhibition was conceived by the artist herself, using the gallery space as a meeting place, along with the text of a friend, who will explain all to interested audience. Invited are all owners of the works of artist OKO, to bring the works they have in their possessions. Works can be brought to the gallery only on Monday November 12, 2012 between 6 – 9 pm. Later additions or changes to the setup will not be possible. The exhibition runs until Saturday November 18, 2012, at 7 pm.